The base of your brain

The brain stem sits lower in the brain and is often considered the “primitive” part of the brain. This may be an oversimplified way of describing this part of the brain – but it does control many life-sustaining functions so without it we are goners! 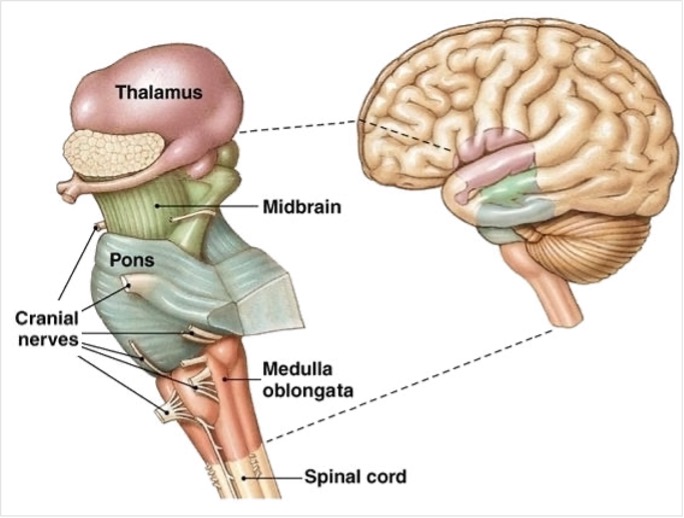 The parts of the brain stem

The brain stem is often referred to as the “primitive” part of the brain or famously the “reptilian brain”. This terminology was proposed by neuroscientist MacLean who wrote in his book, on the evolution of the brain, how different parts of the brain could be ascribed an evolutionary function. This “triune model” has become a simplified model of the brain and because of its appealing simplistic nature has been used and abused by many people including Daniel Goleman one of the father’s of emotional intelligence. I have also used it often. Neuroscientists and I know that this is a very simplified model of the brain. But we also know that there is some truth to it and so for the sake of ease of explanation and appeal to lay audiences this is still often used.

The brain stem is categorised into three sections:

What is also important is that 10 of the 12 cranial nerves target or sources form the brain stem.

The medulla oblongata (normally just called the medulla) is the transition zone of the brain into the spinal cord. It houses a number of critical functions such as two of the three respiratory groups controlling breathing and monitoring this. Also, cardiac control and regulation, controlling heartbeat and monitoring this and also controlling blood pressure.  The vomiting reflex is also controlled in the medulla through a region called the area postrema that monitors chemicals in the blood.

Above the medulla sits the pons which is dense in cranial nerve nuclei and connects the medulla to the thalamus but also coordinates activity in the hemispheres of the cerebellum (I covered the fascinating cerebellum in lbR-2021-01). It also houses the respiratory centre that coordinates with the other two respiratory centres in the medulla. The locus coeruleus is also located here which is a major centre for the synthesis of norepinephrine and a key part of attention and also curiosity circuits.

Above the pons sits the midbrain which has the other five cranial nerve nuclei but also a number of other important regions that crop up again and again in neuroscientific research. The periaqueductal gray is an area of neurons that are involved in multiple processes including pain desensitisation. The substantia nigra and also the ventral tegmental area are also located here and these are two key dopamine synthesising centres. Similarly, the rostro medial tegmental nucleus is a GABAergic centre. But is also houses the reticular formation (with the pons) and this is involved in arousal and consciousness systems. There are also strong connections to the lower motor neurons which is why regions her are also implicate d in Parkinson’s disease.

So, we can see that the brainstem does indeed house a whole host of living critical functions without which we cannot survive. This is why damage to this part of the brain is particularly disruptive and more often than not life threatening e.g. snapping the neck at the top of the spinal cord as we see in many old spy films.

On one hand though we can also see that some things which we consider primitive such as aggression are not actually driven from this region of the brain but more the critical life reflexes are such as heartbeat, breathing, arousal, and attention.

Though you may think that the brain stem is all we need to survive, a condition known as anencephaly shows this is not the case. Anencephaly is a condition in which babies are born without a cerebrum. These babies die shortly after birth which is a stark reminder that the brain does operate as a whole, and functions are spread over the brain.

So that simplified version of what the brain stem is does hold true, but we shouldn’t forget that the brain is incredibly complex and, particularly in human beings, has developed to operate across regions whether “lower” or “higher” – these regions often do not grab the neuroscience and popular science headlines. But without them you would surely not be here●