Selective serotonin reuptake inhibitors (SSRI) may sound like gibberish to many but are in fact one of the most common drugs on the planet. These SRIs are used in mood disorders, particularly depression. The theory is that block the reuptake of serotonin leaves more between synapses and this in turn can control mood or alleviate a negative mood. Is it really that simple? 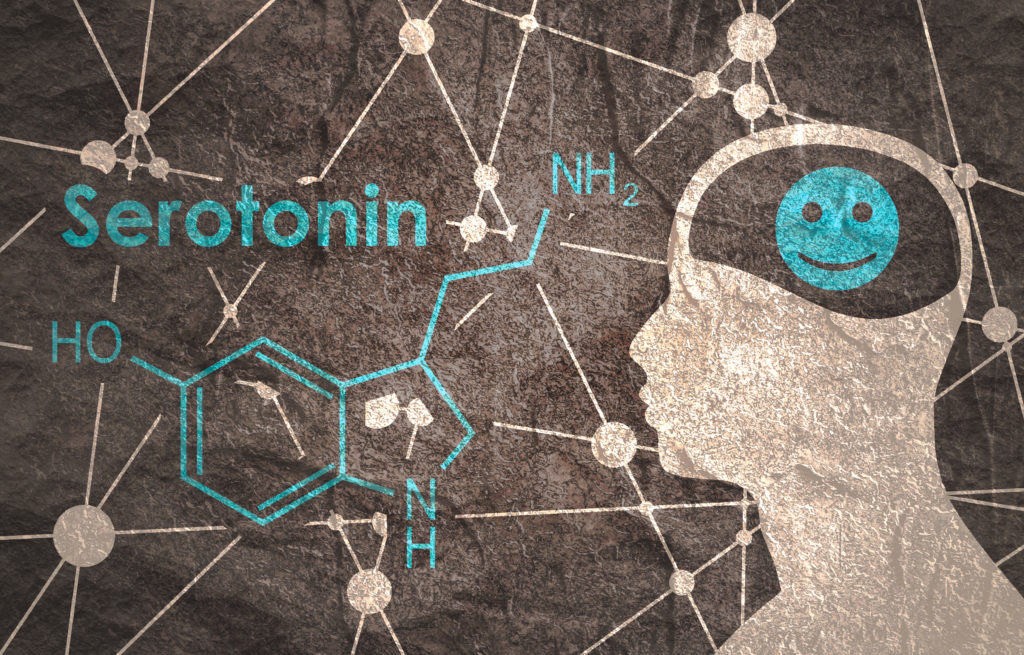 Serotonin is associated with mood more than anything and particularly with alleviating depression and anxiety. But as with all things in the brain it is not quite so simple. Serotonin, or 5-hydroxytryptamine (5-HT), if you want to be technically correct, is known as a monoamine neurotransmitter. However, as Wikipedia put it “Its biological function is complex and multifaceted, modulating mood, cognition, reward, learning, memory, and numerous physiological processes such as vomiting and vasoconstriction.”

Serotonin is after all present in many parts of the body but of particular note is that of its role and production in the enteric nervous system, basically the gastrointestinal tract (digestive system). 90% of the body’s serotonin is produced in the GI tract a further 8 % is stored in platelets in the blood (which absorb this from the GI tract) and only 1-2% is present in the brain. However, the brain and body serotonin systems can be seen is separate systems with little to no influence on each other (the brain and body always exert some influence on each other).

In the body it has numerous functions but of interest is its role in wound healing one acting as a vasoconstrictor helping to close vein and arteries in wounds but also stimulating cell growth. Directly in the gut serotonin has an expellatory effect and can lead to diarrhoea- serotonin in present in many seeds which is why they also have a healthy effect on bowel movements. Interesting to note is also that serotonin is present in many insect and animal venoms, and this helps stimulate pain!

But back to our area of interest, the brain. What does serotonin do in the brain. Well, we have noted that it is considered the neurotransmitter related to mood. By mood we mean a general feeling of positivity and negativity rather than the ups and down of everyday life which may be more related to other transmitters such as dopamine. Hence its role in anti-anxiety drugs and that famous class of SSRIs such as Prozac. It is also negatively associated with aggression – that is lower levels lead to greater aggression. On closer inspection it is impulsive aggression that is increased rather than aggression in general. This I also noted in my feature article on love in last month’s issue whereby when in love serotonin levels decrease leading to mood swings and obsessive-compulsive behaviour. 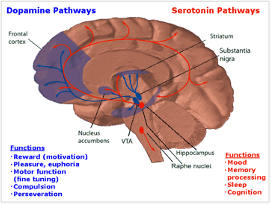 Serotonin therefore seem to be a moderator more than anything in line with its roles as a general mood chemical or rather it takes the edge of impulsive or environmental swings. Its role though is still complex and further research has noted that of two tales of serotonin. This is better termed two receptors of serotonin as noted in a paper in 2017 by Carhart-Harris and Nutt. As I have noted previously neurotransmitters and modulators dock into receptors on neurons and it is this that triggers a response in the neuron. However, neurons have different types of receptors, and these can have different and sometimes opposing effects.

In the case of serotonin there are two receptors that seem to stimulate different pathways and responses. Type one receptors trigger a passive coping response to stress, i.e. moderating the impact of stress inputs, smoothing that curve of emotional stimuli, making the highs lower, and the lows higher. Type two receptors are responsible for active coping in response to stress by enhancing plasticity and learning. The latter has been less focused on in the literature and the general view of serotonin – but it is an important one, as in wound healing in the body whereby serotonin triggers receptors on cells to regenerate, this is also function of serotonin in the brain.

Now, I have said that serotonin in the body and serotonin in the brain can be considered separate systems. But as I also noted there are mutual influences on each other and particularly on the gut-brain axis as I have reported on in many other places. There has also been some interest of how to increase serotonin levels naturally – without pharmacological interventions. And these have some backing:

So, to summarise serotonin is a key chemical transmitter in the human body and brain. In the brain it has a calming and moderating effect on stress moderating mood swings and keeping us in the positive. It also has a key adaptive function increasing plasticity and learning. Its synthesis can be elevated by doing those healthy things that we should be doing through multiple pathways and there appears to be a clear loop with mood. Daylight, exercise, nutrition, and positivity lead to higher serotonin levels which enables you to better manage the stresses of life avoiding a negative loop or vicious circle and also enhancing learning.